How we got here

It’s a century long knock-down-drag-out battle between the needs of the public and an unyielding drive for corporate profits and control. Over time, winners and losers have continued to change but the battle to protect small businesses and consumers has never ended.

Regulated utility companies create holding companies to allow them to enter new unregulated industries. Leveraging utility ratepayer assets, electric utilities buy most of the electric streetcar companies operating at the time and dominate the market.  This allows them to realize profits from the unregulated business throughout the depression.

The National Electric Light Association organizes one of the largest public relations and lobbying campaign in history with two goals.

US Senate begins a 7-year investigation into large scale corruption and abuses of utility holding companies. These multi-leveled corporate structures were nearly impossible for states to track or regulate.

The Federal Trade Commission calls for the elimination of “evil practices and conditions” in the utility industry and documents the massive “propaganda” campaign waged by the utilities.

Congress faces a massive lobbying campaign against placing restrictions on utilities including millions of letters and hundreds of thousands of telegrams.

Senator Hugo Black and the Black Committee uncovers a $5 Million ($93 million in today’s dollars) lobbying campaign to prevent utility regulation including more that 250,000 fake telegrams falsely claiming to be from real citizens and a massive coverup as well as claims that the utilities wiretapped Senators phones, bribery and tax evasion.

December: 45 lawsuits brought by over 100 utility companies attempting to prevent the PUHCA from being enacted end at the US Supreme Court and the Act is fully implemented and enforced.

For the next 54 years, utilities are restricted by federal law from entering into unregulated markets, creating pyramid corporate structures and cross-subsidizing non-utility businesses.

The SEC and electric utilities begin push for repeal of PUHCA.

The Energy Policy Act of 1992 partially repeals PUHCA and allows for independent power generators to create utility holding companies again. This leads to the bankruptcies of several utilities including Mirant Energy, Montana Power Company, and Westar Energy who made bad deals moving into unregulated subsidiaries.

Energy Policy Act of 2005 passed both houses of Congress and was signed into law by President George W. Bush, fully repealing PUHCA.

State commissions and legislatures act to fill the regulatory gaps created by the repeal of the PUHCA including California, Kansas, Maryland, Arkansas, New Jersey, Texas and many others.

Despite massive political spending and lobbying, most states have found a way to enact and enforce regulations to protect citizens from monopoly utility expansions.  Florida has yet to do so.
Florida’s Failure to Regulate, MEP Coalition Report 2019

A century long battle but the facts have not changed.

The use of holding companies to allow utility monopolies to acquire or set up new businesses in other unregulated industries has been debated since the 1920’s. Referred to as “self-dealing” and “pyramiding”, there has been an unending battle between the need to provide stable and efficient power infrastructure and protect ratepayers from the relentless drive for utility profits.

“The utility holding company with its present powers must go. If we could remake our financial history in the light of experience, certainly we would have none of this holding company business. It is a device which does not belong to our American traditions of law and business… And it offers too well demonstrated temptation to, and facility for, abuse to be tolerated as a recognized business institution.”
President Franklin Delano RooseveltMarch 12, 1933
“Holding company artificial pool operations and subsidiary pool operator shell game artists, instead of using only 3 shells and 1 pea like old-time Wall Street fakers, have operated dozens of shells to lose 1 pea in a maze of manipulations with no semblance of stability or honesty.”
C. C MayePUHCA Congressional Hearings, April 16, 1935
“The diversification of regulated utilities into unregulated markets raises significant concerns about competition, particularly the effect of this phenomenon on the ability of certain small firms to survive. In addition, utility diversification can affect utility rates as well as the supply and price of other goods and services available to consumers.”
Winston S. MooreAssistant Director, Federal Trade Commission, 1984
“If a new entrant possesses a competitive advantage which is not based on its being more efficient-for example, if it can subsidize its new business with revenues from a government sanctioned monopoly-then consumers and efficient competitors will suffer.”
Winston S. MooreAssistant Director, Federal Trade Commission, 1984
“The market power of utilities that are permitted to finance competitive activities with resources gained from regulated monopoly operations presents a daunting challenge to contractors. Utilities engaged in unregulated businesses enjoy unique advantages over competing unregulated private firms through their government-granted monopoly status. It is generally recognized that participation in unregulated markets by regulated entities, such as utilities, raise competition concerns, particularly with respect to the problem of cross-subsidies between regulated and unregulated ventures.”
Frank S. SwainChief Counsel, Small Business Administration, 1984
“No captive ratepayers of a regulated entity—whether they be residential, small business, or large industrial consumers—should ever be forced to subsidize the unregulated, diversified investments of the regulated entity’s parent company or any unregulated affiliate.”
John HughesELCON, PUHCA Senate Hearing: June 6, 1996
‘‘No costs associated with an off-system investment, or with regulating such an investment to protect captive customers, should be borne by rate- payers. “
Larry FrimermanNASUCA, PUHCA Senate Hearings, April 29, 1997
“Some of the these abuses include utility company cross-subsidization of affiliate company transactions; diversification of utilities by investments in unrelated businesses, which could put their credit ratings at risk; improper use of utility company assets or revenue as collateral for affiliate loans; utilities and subsidiaries engaging in transfer pricing, potentially resulting in utilities being charged prices in excess of market prices for goods and services; and the use of utilities as “cash cows” to make excessive dividend payments.”
James Van NostrandState Regulation After the Repeal of PUHCA, Energy Bar Association Annual Meeting 2006
“Florida’s repeated and systemic failure to protect ratepayers is an embarrassment and should serve as a rallying cry for change...Ratepayer funds should only be used to ensure the efficient operation of public utilities and to allow them to build and maintain their infrastructure. They shouldn’t be used to line the pockets of utilities and to lobby for their special interests.”
Jaime DiDomenicoMEP Coalition, Florida Sun Sentinel. May 27, 2019
Previous
Next
Click to Download PDFs 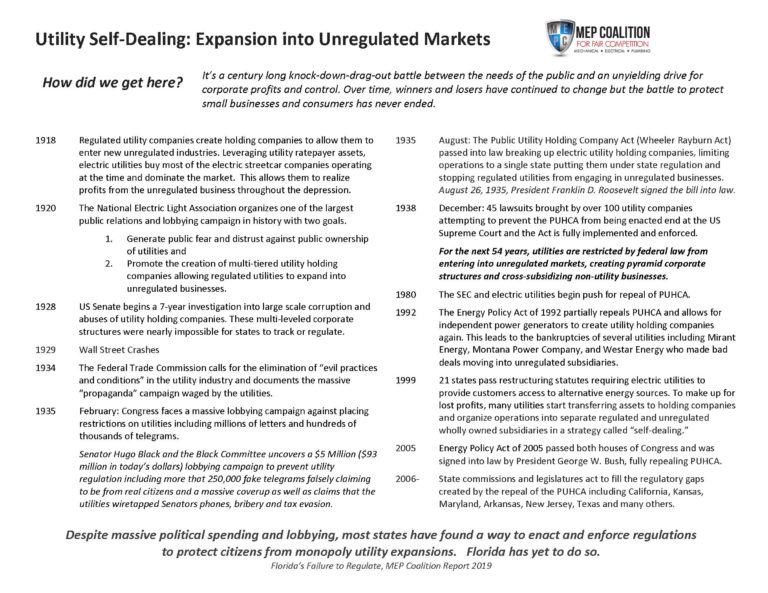 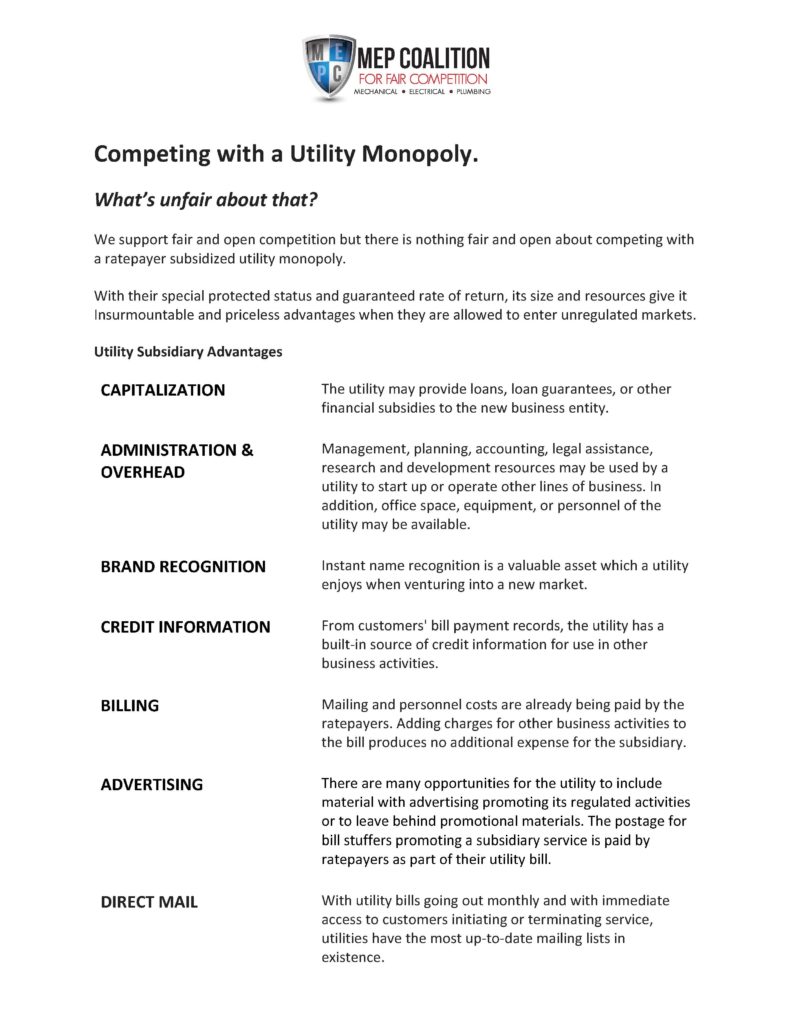 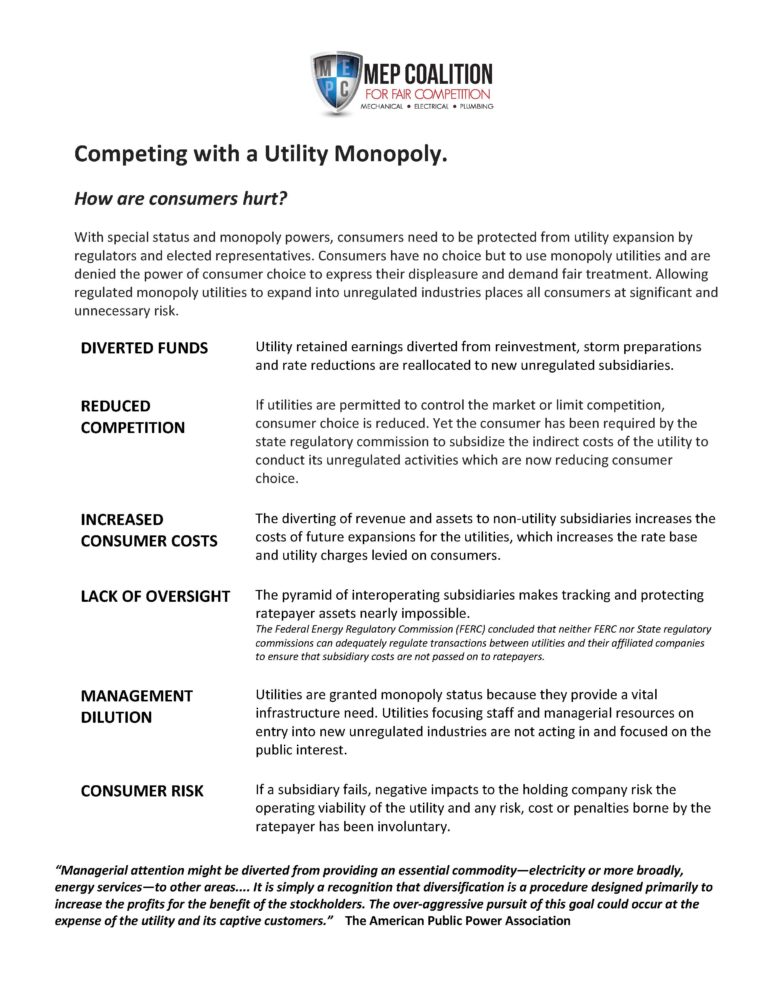